“At least I am not black”  is a phrase that I want you to use as thought experiment for a few moments.  The phrase evokes a sentiment, a psychological conditioning, that has been analyzed by numerous historians–most convincingly in recent decades by David Roediger.  The gist is that no matter how poor one’s station in life may be, one can find solace in a community of peers of the same race.  This phrase unearths a mental imposition of false assumptions and a mythology of social cohesiveness.  At its core,”at least I am not black” presents the illusion that one is superior to others based on an imagined kinship–an assumption of what one is not as an affirmation of what one might be.  This mindset is more than a pathology.  Its utility, durability, and longevity would render it more fitting as kind of technology.
More simply stated, whiteness works as a tool.   It is a simple machine like the mechanical devices that change the direction or magnitude of force.  One of the most simple of machines illustrates the gist of this idea—the use of leverage to present an illusion of greater strength.  A small man can lift a large load using a lever.  To the uninitiated eye, this man may appear to have herculean strength, when in fact he could be weaker than the average man.  The lever is what makes the difference. 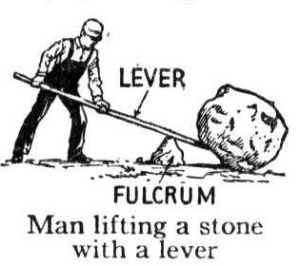 Whiteness is a tool that creates distinctions in identity to leverage power.  The greater the distance between the man and the stone, the more effective his force on the stone becomes.  Likewise the greater the perceived distance in assumptions about culture, values, intelligence, and aptitude between white and non-white people, the more powerful whiteness becomes to those who employ it but also to those who are being acted upon.  These systems of reality matter.
If thinking about whiteness in this way is a strange concept to you, please consider the work of Peggy McIntosh, Zeus Leonardo & Michalinos Zembylas, and Michael Adas. These are a few recent works that have reinterpreted a longer discourse among black writers and intellectuals such as Frantz Fanon, W.E.B. Du Bois, Mariah W. Stewart, and Ida Wells.  They all discuss the power of whiteness not as an intrinsic entity but rather as a tool that leverages force and in doing so creates identity.
A very interesting point that Baldwin made in a Cambridge Union debate with William Buckley focused on notions of whiteness and how white identity in the American dream came at the expense of blacks. This is one side of another argument that is equally compelling but less acknowledged.  Baldwin put forth the proposition that the notion of white superiority came at a cost–a loss of a sense of humanity on the part of whites. Baldwin argued that the paradox of what had happened to white southerners was actually worse than what happened to Negroes in the process:

But what happens to the poor white man’s, the poor white woman’s, mind? It is this they have been raised to believe, and by now they helplessly believe, that no matter how terrible some of their lives may be and no matter what disaster overtakes them, there is one consolation like a heavenly revelation— at least they are not black.

According to Baldwin, the decision to employ a lever of racial superiority may be effective in multiplying force but it comes with severe consequences.  Racism is a mutual tragedy that dehumanizes both blacks and whites.  Feelings and affirmations of white superiority act as a lever to exert a large force over a small distance at one end by exerting only a small force over a greater distance at the other.  In other words, whiteness and the trappings of institutional racism come at a cost.  In a racially stratified society, one can only become more powerful by further alienating and distancing oneself from others. The lever of whiteness is a technology of power.  It is a tool that enables a relatively small and arbitrary population to feel superior but it also disengages people from the fellowship of a common humanity. Perhaps the best rejoinder to the phrase “at least I am not black”  would be “at least I am not a tool.”  Mind your tools, lest you become them.